So we are good to deal with file opening, inserting some text in the file and saving it in the vi editor. In this post, we'll be looking into some more details like how to move the cursor to some place, how to copy and paste some words or a whole line etc.

So, in our earlier discussions, we have created a file with 50 lines of text and we will be using the same file to demonstrate some other commands of vi editor.

Open the file using vi command. Remember all of this post works in Command Mode and not in Insert mode. So, be careful about what you are doing or you will end up by messing up everything.

Now going any further, let's print the line numbers in the file. To do that, simply write in the command mode, 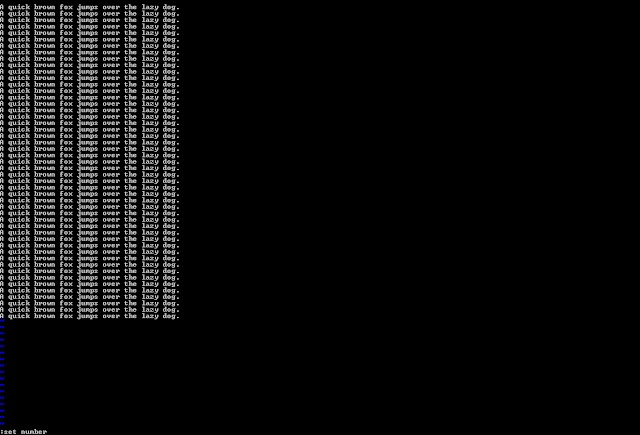 So, in the bottom left corner, you can see, I've entered the command to show the line numbers. This is pretty useful when dealing with long files. Let's see what happens when we hit enter after typing the command, 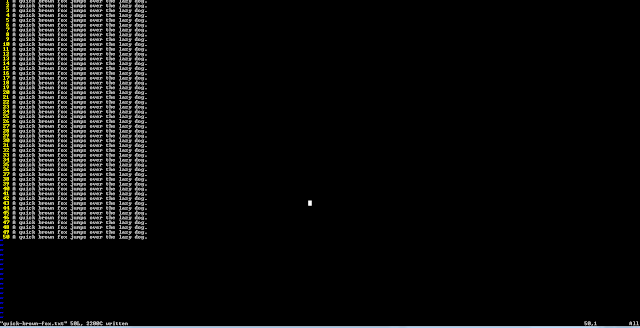 Now you can see that in each line the corresponding line numbers are shown. Again, note that the color combination in your system may vary from mine based on the version of vi and the terminal profile.

So if you press the key combination in succession, you will return back to the same character you started with h k l j. Play with this combination couple of times and come back.

Now let's try these commands as prefix,
move the cursor to the middle of a line and try the following commands
5h 5j 5k 5l
or
3h 3k 3l 3j
or,
10h 10j 10k 10l
or
<number>h <number>j <number>k <number>l
This time you will see that instead of moving a character, the cursor is moving the specified number of characters. For example 5h will move the cursors 5 characters left and if there are not enough characters, it will move to the first character. Similar goes with j k and l.

Now, if you have noticed that vi editor is quite case sensitive (remember we used ZZ to save our file and not zz). So, if you try W B E instead of w b e, you will notice that, these commands will ignore punctuation. Here also you can add number prefix to move forward or backward more than one word in a line.
Now these are the shortcuts for moving through characters and words. Next we'll check out shortcuts for moving through lines.

With lots of moving around, you may forget where you  started or where you are. So, you need the information to be shown. You have three options to do that,

Now we'll check where the file is really long and we need to jump around from here to there. So, we'll be needing larger file. So, I would request the reader to again work on their typing skill and write the same content to make it 150 lines of same text, "A quick brown fox jumps over the lazy dog.".
Too much of typing, right ?
Yes I know. But it will help you in future. Even I am typing all these. So why can't you ?
Take a break, have some coffee, may be walk around for some time and come back once fresh. Type another 100 lines and come back. In the mean time let me write on the next part of this series.
Happy typing...
at July 14, 2016